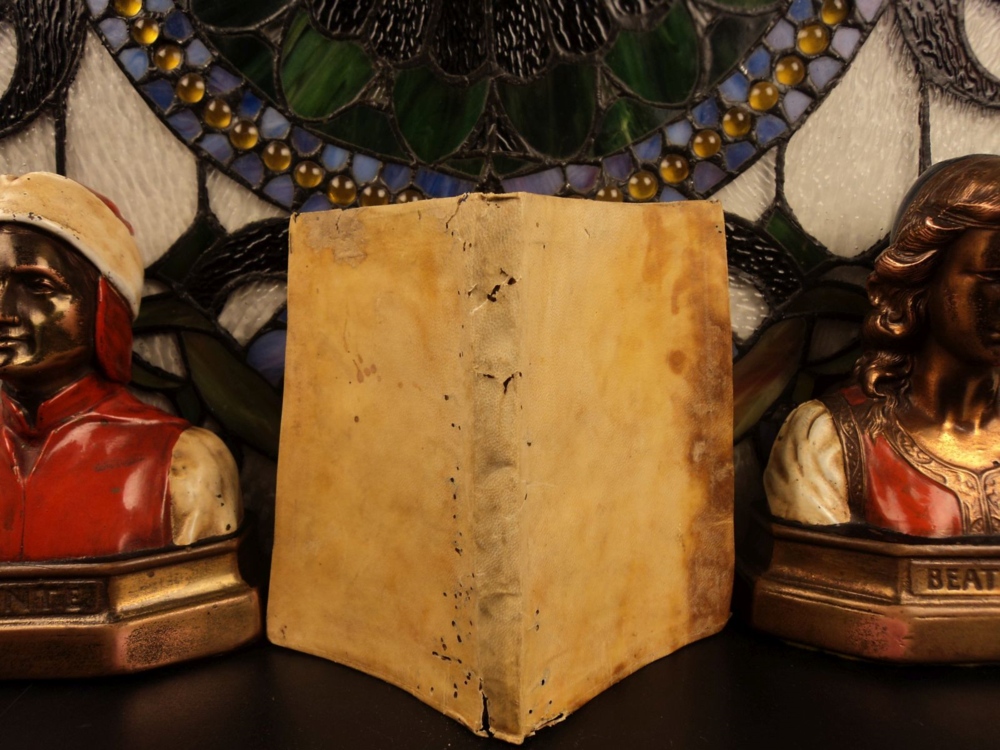 Persius, in full Aulus Persius Flaccus (34 – 62), was a Roman poet and satirist of Etruscan origin. In his works, poems and satires, he shows a stoic wisdom and a strong criticism for the abuses of his contemporaries. His works, which became very popular in the Middle Ages, were published after his death by his friend and mentor the stoic philosopher Lucius Annaeus Cornutus. 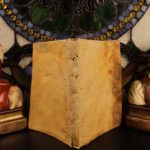 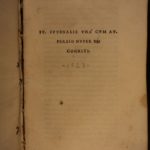 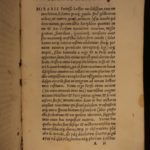 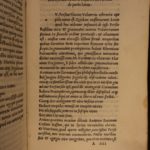 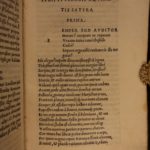 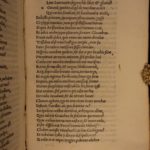 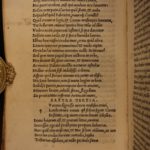 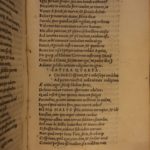 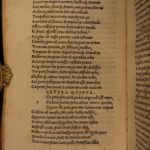 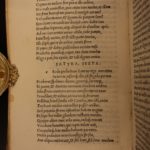 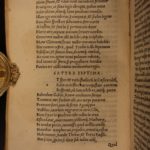 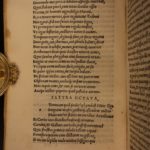 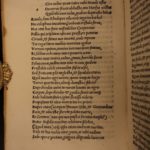 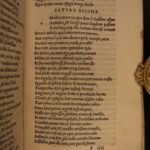 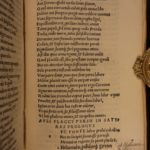 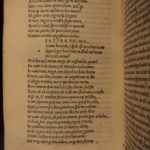 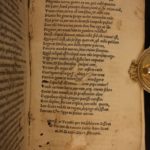 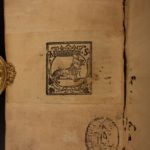 Persius, in full Aulus Persius Flaccus (34 – 62), was a Roman poet and satirist of Etruscan origin. In his works, poems and satires, he shows a stoic wisdom and a strong criticism for the abuses of his contemporaries. His works, which became very popular in the Middle Ages, were published after his death by his friend and mentor the stoic philosopher Lucius Annaeus Cornutus.

Pages: complete with all 80 leaves (160 pages according to modern pagination); plus indexes, prefaces, and such

Frontispiece depicting Juvenal and Persius, from a volume translated by John Dryden in 1711.

Juvenal is credited with sixteen known poems divided among five books; all are in the Roman genre of satire, which, at its most basic in the time of the author, comprised a wide-ranging discussion of society and social mores in dactylic hexameter.[1] The poems are not individually titled, but translators have often added titles for the convenience of readers.

Roman Satura was a formal literary genre rather than being simply clever, humorous critique in no particular format. Juvenal wrote in this tradition, which originated with Lucilius and included the Sermones of Horace and the Satires of Persius.[2] In a tone and manner ranging from irony to apparent rage, Juvenal criticizes the actions and beliefs of many of his contemporaries, providing insight more into value systems and questions of morality and less into the realities of Roman life. The author employs outright obscenity less frequently than Martial or Catullus, but the scenes painted in his text are no less vivid or lurid for that discretion.

The author makes constant allusion to history and myth as a source of object lessons or exemplars of particular vices and virtues. Coupled with his dense and elliptical Latin, these tangential references indicate that the intended reader of the Satires was highly educated.[3] The Satires are concerned with perceived threats to the social continuity of the Roman citizens: social-climbing foreigners, unfaithfulness, and other more extreme excesses of their own class. The intended audience of the Satires constituted a subset of the Roman elite, primarily adult males of a more conservative social stance.

2.5.3    Satire XV: People without Compassion are Worse than Animals

The controversies concerning the surviving texts of the Satires have been extensive and heated. Many manuscripts survive, but only P (the Codex Pithoeanus Montepessulanus), a 9th-century manuscript based on an edition prepared in the 4th century by a pupil of Servius Honoratus, the grammarian, is reasonably reliable. At the same time as the Servian text was produced, however, other and lesser scholars also created their editions of Juvenal: it is these on which most medieval manuscripts of Juvenal are based. It did not help matters that P disappeared sometime during the Renaissance and was only rediscovered around 1840. It is not, however, uncommon for the generally inferior manuscripts to supply a better reading in cases when P is imperfect. In addition, modern scholarly debate has also raged around the authenticity of the text which has survived, as various editors have argued that considerable portions are not, in fact, authentically Juvenalian and represent interpolations from early editors of the text. Jachmann (1943) argued that up to one-third of what survives is non-authentic: Ulrick Knoche (1950) deleted about hundred lines, Clausen about forty, Courtney (1975) a similar number. Willis (1997) italicizes 297 lines as being potentially suspect. On the other hand, Vahlen, Housman, Duff, Griffith, Ferguson and Green believe the surviving text to be largely authentic: indeed Green regards the main problem as being not interpolations but lacunae.[4]

In recent times debate has focused on the authenticity of the “O Passage” of Satire VI, 36 lines (34 of which are continuous) discovered by E.O. Winstedt in an 11th-century manuscript in Oxford’s Bodleian Library. These lines occur in no other manuscript of Juvenal, and when discovered were considerably corrupted. Ever since Housman translated and emended the “O Passage” there has been considerable controversy over whether the fragment is in fact a forgery: the field is currently split between those (Green, Ferguson, Courtney) who believe it isn’t, and those (Willis, Anderson), who believe it is.[4]

Satire I: It is Hard not to Write Satire[edit]

It is hard not to write Satire. For who is so tolerant

of the unjust City, so steeled, that he can restrain himself…

This so-called “Programmatic Satire” lays out for the reader a catalogue of ills and annoyances that prompt the narrator to write satire.[5] Some examples cited by Juvenal include eunuchs getting married, elite women performing in a beast hunt, and the dregs of society suddenly becoming wealthy by gross acts of sycophancy. To the extent that it is programmatic, this satire concerns the first book rather than the satires of the other four known books. The narrator explicitly marks the writings of Lucilius as the model for his book of poems (lines 19–20), although he claims that to attack the living as his model did incur great risk (lines 165-67). The narrator contends that traditional Roman virtues, such as fides and virtus, had disappeared from society to the extent that “Rome was no longer Roman”:[5]

Dare something worthy of exile to tiny Gyara and death row,

if you want to be anything at all. Probity is praised – and it shivers in the street.

lines 1.1–19 – Since there are so many poets wasting paper and everyone’s time anyway – why not write?

lines 1.20–80 – The narrator recites a catalogue of social deviants and criminals that demand Satire be written.

lines 1.81–126 – Since the dawn of history, greed and fiscal corruption have never been worse.

lines 1.127–146 – The narrator contrasts a typical day in the life of poor clients with that of their self-indulgent patron.

lines 1.147–171 – The past cannot be worse than the present – yet one should only satirize the dead if they wish to live in safety.

I get an itch to run off beyond the Sarmatians and the frozen sea,

170 lines. The narrator claims to want to flee civilization (i.e. Roma) to beyond the world’s end when confronted by moral hypocrisy. Although the broad theme of this poem is the process of gender inversion, it would be an error to take it as simple invective against pathic men. Juvenal is concerned with gender deviance

lines 2.1–35 – Pathic men that pretend to be moral exemplars are much worse than those who are open about their proclivities.

lines 2.36–65 – When criticized for her morals, Laronia turns on one of these hypocrites and mocks their open effeminacy.

lines 2.65–81 – Criticism of the effeminate dress of Creticus as he practices law. This moral plague (contagio) spreads like disease passes through an entire herd of livestock or a bunch of grapes.

lines 2.82–116 – Effeminate dress is the gateway to complete gender inversion.

lines 2.117–148 – A noble man, Gracchus, gets married to another man – but such brides are infertile no matter what drugs they try or how much they are whipped in the Lupercalia.

lines 2.149–170 – The ghosts of great Romans of the past would feel themselves contaminated when such Romans descend to the underworld.

Satire III: There is no Room in Rome for a Roman[edit]

What could I do at Rome? I don’t know how to lie;

If a book is bad, I am unable to praise it and ask for one;

nor able to predict the death of someone’s father; I never inspected the guts

of frogs; other men know all about ferrying what the adulterers send to brides;

nobody is going to be a thief with me as his accomplice,

– I’m like a cripple, a useless body with a dead right hand.

322 lines. In the place where Numa Pompilius (the legendary second king of Rome) received a nymph’s advice on creating Roman law, the narrator has a final conversation with his Roman friend Umbricius, who is emigrating to Cumae. Umbricius claims that slick and immoral foreigners have shut a real Roman out of all opportunity to prosper. Only the first 20 lines are in the voice of the narrator; the remainder of the poem is cast as the words of Umbricius.