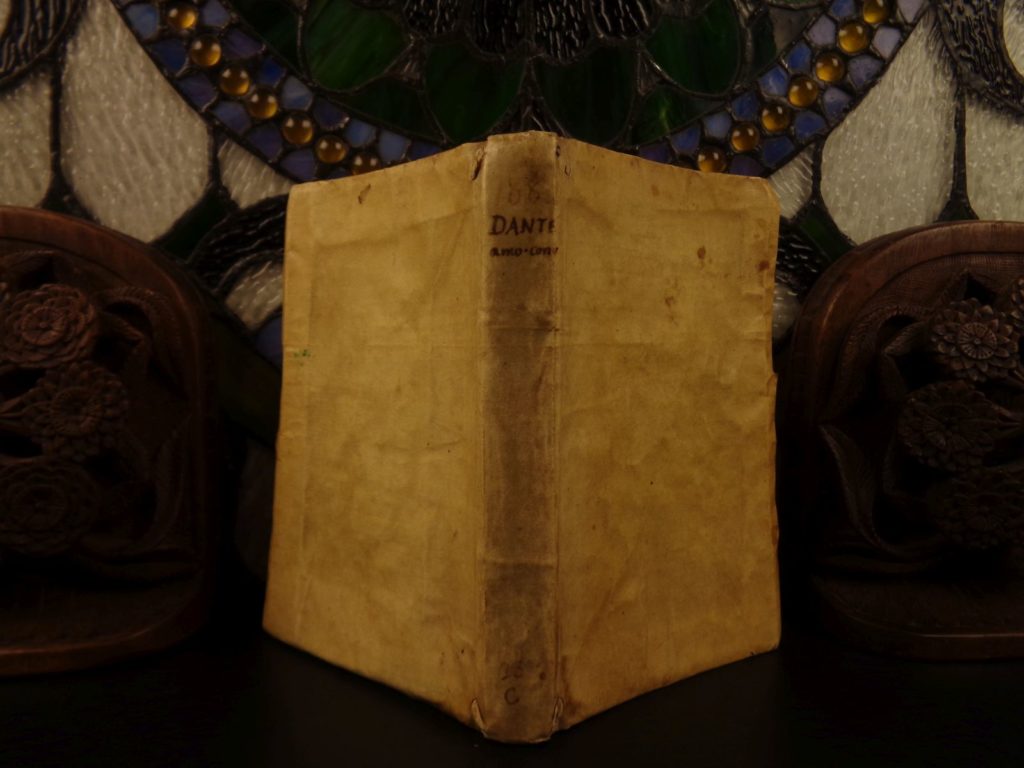 Dante Alighieri (c. 1265 – 1321), was a major Italian poet of the Late Middle Ages. His Divine Comedy, originally called Comedìa (modern Italian: Commedia) and later christened Divina by Boccaccio, is widely considered the greatest literary work composed in the Italian language and a masterpiece of world literature.

Convivio is a work written by Dante Alighieri roughly between 1304 and 1307. This unfinished work of Dante consists of four trattati, or “books”: a prefatory one, plus three books that each include a canzone (long lyrical poem) and a prose allegorical interpretation or commentary of the poem that goes off in multiple thematic directions. 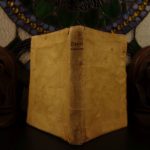 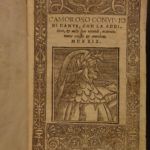 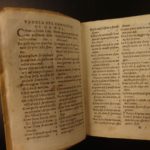 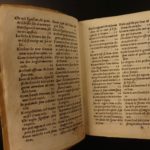 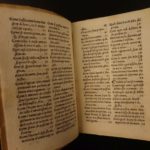 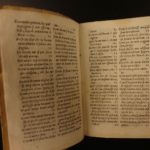 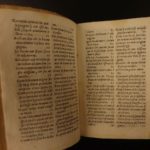 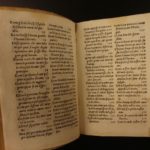 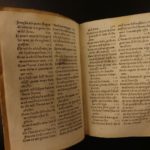 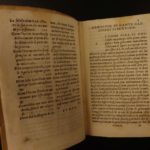 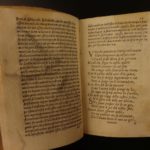 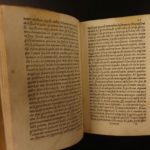 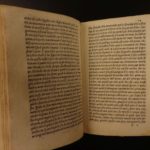 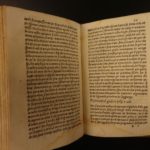 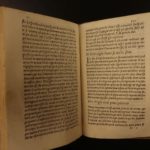 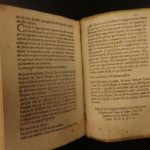 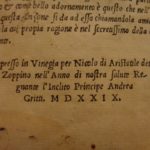 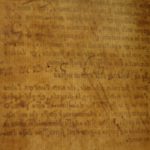 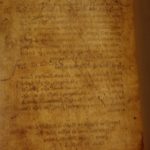 Dante Alighieri (c. 1265 – 1321), was a major Italian poet of the Late Middle Ages. His Divine Comedy, originally called Comedìa (modern Italian: Commedia) and later christened Divina by Boccaccio, is widely considered the greatest literary work composed in the Italian language and a masterpiece of world literature.

Convivio is a work written by Dante Alighieri roughly between 1304 and 1307. This unfinished work of Dante consists of four trattati, or “books”: a prefatory one, plus three books that each include a canzone (long lyrical poem) and a prose allegorical interpretation or commentary of the poem that goes off in multiple thematic directions.

Pages: complete with all 124 pages; plus indexes, prefaces, and such

In the late Middle Ages, the overwhelming majority of poetry was written in Latin, and therefore accessible only to affluent and educated audiences. In De vulgari eloquentia (On Eloquence in the Vernacular), however, Dante defended use of the vernacular in literature. He himself would even write in the Tuscan dialect for works such as The New Life (1295) and the aforementioned Divine Comedy; this choice, although highly unorthodox, set a hugely important precedent that later Italian writers such as Petrarch and Boccaccio would follow. As a result, Dante played an instrumental role in establishing the national language of Italy. Dante’s significance also extends past his home country; his depictions of Hell, Purgatory, and Heaven have provided inspiration for a large body of Western art, and are cited as an influence on the works of John Milton, Geoffrey Chaucer and Lord Alfred Tennyson, among many others. In addition, the first use of the interlocking three-line rhyme scheme, or the terza rima, is attributed to him.

Dante has been called “the Father of the Italian language” and one of the greatest poets of world literature.[2] In Italy, Dante is often referred to as il Sommo Poeta (“the Supreme Poet”) and il Poeta; he, Petrarch, and Boccaccio are also called “the three fountains” or “the three crowns”.

Dante was born in Florence, Republic of Florence, present-day Italy. The exact date of his birth is unknown, although it is generally believed to be around 1265. This can be deduced from autobiographic allusions in the Divine Comedy. Its first section, the Inferno, begins, “Nel mezzo del cammin di nostra vita” (“Midway upon the journey of our life”), implying that Dante was around 35 years old, since the average lifespan according to the Bible (Psalm 89:10, Vulgate) is 70 years; and since his imaginary travel to the nether world took place in 1300, he was most probably born around 1265. Some verses of the Paradiso section of the Divine Comedy also provide a possible clue that he was born under the sign of Gemini: “As I revolved with the eternal twins, I saw revealed, from hills to river outlets, the threshing-floor that makes us so ferocious” (XXII 151–154). In 1265, the sun was in Gemini between approximately May 11 and June 11.[3]

Portrait of Dante, from a fresco in the Palazzo dei Giudici, Florence

Dante claimed that his family descended from the ancient Romans (Inferno, XV, 76), but the earliest relative he could mention by name was Cacciaguida degli Elisei (Paradiso, XV, 135), born no earlier than about 1100. Dante’s father, Alaghiero[4] or Alighiero di Bellincione, was a White Guelph who suffered no reprisals after the Ghibellines won the Battle of Montaperti in the middle of the 13th century. This suggests that Alighiero or his family may have enjoyed some protective prestige and status, although some suggest that the politically inactive Alighiero was of such low standing that he was not considered worth exiling.[5]

Dante’s family had loyalties to the Guelphs, a political alliance that supported the Papacy and which was involved in complex opposition to the Ghibellines, who were backed by the Holy Roman Emperor. The poet’s mother was Bella, likely a member of the Abati family.[4] She died when Dante was not yet ten years old, and Alighiero soon married again, to Lapa di Chiarissimo Cialuffi. It is uncertain whether he really married her, since widowers were socially limited in such matters, but this woman definitely bore him two children, Dante’s half-brother Francesco and half-sister Tana (Gaetana). When Dante was 12, he was promised in marriage to Gemma di Manetto Donati, daughter of Manetto Donati, member of the powerful Donati family.[4] Contracting marriages at this early age was quite common and involved a formal ceremony, including contracts signed before a notary. But by this time Dante had fallen in love with another, Beatrice Portinari (known also as Bice), whom he first met when he was only nine. Years after his marriage to Gemma he claims to have met Beatrice again; he wrote several sonnets to Beatrice but never mentioned Gemma in any of his poems. The exact date of his marriage is not known: the only certain information is that, before his exile in 1301, he had three children (Pietro, Jacopo and Antonia).[4]

Dante in Verona, by Antonio Cotti

Dante fought with the Guelph cavalry at the Battle of Campaldino (June 11, 1289).[6] This victory brought about a reformation of the Florentine constitution. To take any part in public life, one had to enroll in one of the city’s many commercial or artisan guilds, so Dante entered the Physicians’ and Apothecaries’ Guild. In the following years, his name is occasionally recorded as speaking or voting in the various councils of the republic. A substantial portion of minutes from such meetings in the years 1298–1300 was lost, however, so the true extent of Dante’s participation in the city’s councils is uncertain.

Gemma bore Dante several children. Although several others subsequently claimed to be his offspring, it is likely that only Jacopo, Pietro, Giovanni and Antonia were his actual children. Antonia later became a nun, taking the name Sister Beatrice.

This section needs additional citations for verification. Please help improve this article by adding citations to reliable sources. Unsourced material may be challenged and removed. (December 2015) (Learn how and when to remove this template message)

Not much is known about Dante’s education; he presumably studied at home or in a chapter school attached to a church or monastery in Florence. It is known that he studied Tuscan poetry and that he admired the compositions of the Bolognese poet Guido Guinizelli—whom in Purgatorio XXVI he characterized as his “father”—at a time when the Sicilian school (Scuola poetica Siciliana), a cultural group from Sicily, was becoming known in Tuscany. His interests brought him to discover the Provençal poetry of the troubadours, such as Arnaut Daniel, and the Latin writers of classical antiquity, including Cicero, Ovid and especially Virgil.

Statue of Dante at the Uffizi, Florence

Dante said he first met Beatrice Portinari, daughter of Folco Portinari, at age nine, and claimed to have fallen in love with her “at first sight”, apparently without even talking with her. He saw her frequently after age 18, often exchanging greetings in the street, but never knew her well. In effect, he set an example of so-called courtly love, a phenomenon developed in French and Provençal poetry of prior centuries. Dante’s experience of such love was typical, but his expression of it was unique. It was in the name of this love that Dante left his imprint on the dolce stil novo (sweet new style, a term which Dante himself coined), and he would join other contemporary poets and writers in exploring never-before-emphasized aspects of love (Amore). Love for Beatrice (as Petrarch would show for Laura somewhat differently) would be his reason for poetry and for living, together with political passions. In many of his poems, she is depicted as semi-divine, watching over him constantly and providing spiritual instruction, sometimes harshly. When Beatrice died in 1290, Dante sought refuge in Latin literature. The Convivio chronicles his having read Boethius’s De consolatione philosophiae and Cicero’s De Amicitia. He then dedicated himself to philosophical studies at religious schools like the Dominican one in Santa Maria Novella. He took part in the disputes that the two principal mendicant orders (Franciscan and Dominican) publicly or indirectly held in Florence, the former explaining the doctrines of the mystics and of St. Bonaventure, the latter expounding on the theories of St. Thomas Aquinas.

At 18, Dante met Guido Cavalcanti, Lapo Gianni, Cino da Pistoia and soon after Brunetto Latini; together they became the leaders of the dolce stil novo. Brunetto later received special mention in the Divine Comedy (Inferno, XV, 28) for what he had taught Dante: Nor speaking less on that account I go With Ser Brunetto, and I ask who are his most known and most eminent companions. Some fifty poetical commentaries by Dante are known (the so-called Rime, rhymes), others being included in the later Vita Nuova and Convivio. Other studies are reported, or deduced from Vita Nuova or the Comedy, regarding painting and music.

Illustration for Purgatory (Purgatorio) by Doré

This section needs additional citations for verification. Please help improve this article by adding citations to reliable sources. Unsourced material may be challenged and removed. (December 2015) (Learn how and when to remove this template message)

Dante, like most Florentines of his day, was embroiled in the Guelph–Ghibelline conflict. He fought in the Battle of Campaldino (June 11, 1289), with the Florentine Guelphs against Arezzo Ghibellines;[6][7] then in 1294 he was among the escorts of Charles Martel of Anjou (grandson of Charles I of Naples, more commonly called Charles of Anjou) while he was in Florence. To further his political career, he became a pharmacist. He did not intend to practice as one, but a law issued in 1295 required nobles aspiring to public office to be enrolled in one of the Corporazioni delle Arti e dei Mestieri, so Dante obtained admission to the Apothecaries’ Guild. This profession was not inappropriate, since at that time books were sold from apothecaries’ shops. As a politician he accomplished little, but held various offices over some years in a city rife with political unrest.