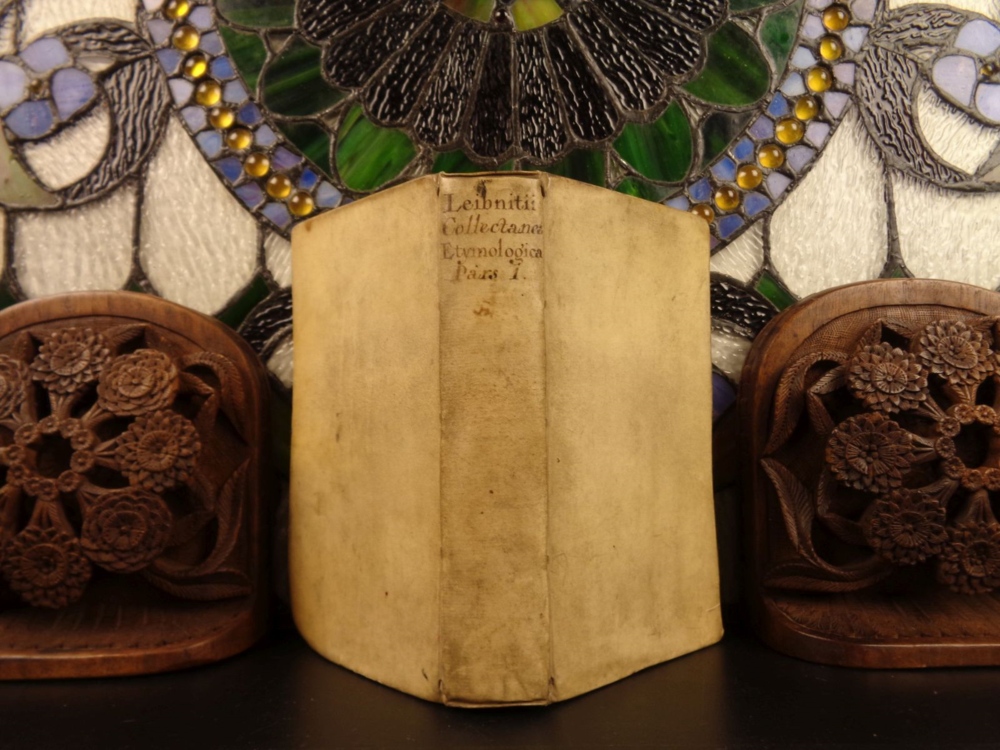 Famous work on French and Germanic languages and etymology by Leibniz. 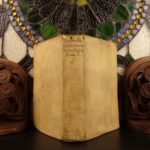 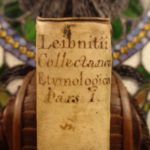 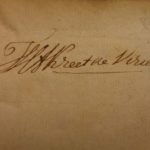 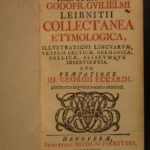 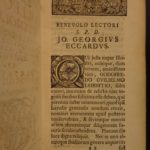 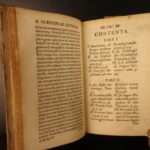 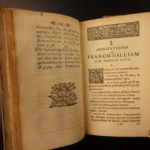 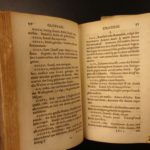 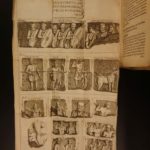 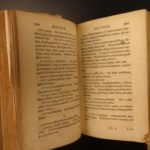 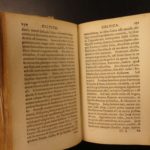 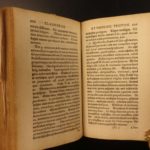 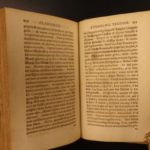 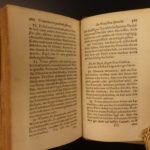 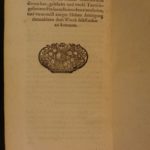 Famous work on French and Germanic languages and etymology by Leibniz.

Gottfried Wilhelm von Leibniz (German: [ˈɡɔtfʁiːt ˈvɪlhɛlm fɔn ˈlaɪbnɪts][4] or [ˈlaɪpnɪts][5]) (July 1, 1646 – November 14, 1716) was a German mathematician and philosopher. He occupies a prominent place in the history of mathematics and the history of philosophy.

Leibniz developed the infinitesimal calculus independently of Isaac Newton, and Leibniz’s mathematical notation has been widely used ever since it was published. It was only in the 20th century that his Law of Continuity and Transcendental Law of Homogeneity found mathematical implementation (by means of non-standard analysis). He became one of the most prolific inventors in the field of mechanical calculators. While working on adding automatic multiplication and division to Pascal’s calculator, he was the first to describe a pinwheel calculator in 1685[6] and invented the Leibniz wheel, used in the arithmometer, the first mass-produced mechanical calculator. He also refined the binary number system, which is at the foundation of virtually all digital computers.

In philosophy, Leibniz is most noted for his optimism, e.g., his conclusion that our Universe is, in a restricted sense, the best possible one that God could have created. Leibniz, along with René Descartes and Baruch Spinoza, was one of the three great 17th century advocates of rationalism. The work of Leibniz anticipated modern logic and analytic philosophy, but his philosophy also looks back to the scholastic tradition, in which conclusions are produced by applying reason to first principles or prior definitions rather than to empirical evidence.

Leibniz made major contributions to physics and technology, and anticipated notions that surfaced much later in philosophy, probability theory, biology, medicine, geology, psychology, linguistics, and computer science. He wrote works on philosophy, politics, law, ethics, theology, history, and philology. Leibniz’s contributions to this vast array of subjects were scattered in various learned journals, in tens of thousands of letters, and in unpublished manuscripts. He wrote in several languages, but primarily in Latin, French, and German.[7] There is no complete gathering of the writings of Leibniz.[8]

11.1 As a mathematician and philosopher

Gottfried Leibniz was born on July 1, 1646 (near the 1648 end of the Thirty Years’ War), in Leipzig, Saxony, to Friedrich Leibniz and Catharina Schmuck. Friedrich noted in his family journal:

His father died when Leibniz was six years old, and from that point on he was raised by his mother. Her teachings influenced Leibniz’s philosophical thoughts in his later life.[citation needed]

Leibniz’s father had been a Professor of Moral Philosophy at the University of Leipzig and the boy inherited his father’s personal library. He was given free access to it from the age of seven. While Leibniz’s schoolwork focused on a small canon of authorities, his father’s library enabled him to study a wide variety of advanced philosophical and theological works – ones that he would not have otherwise been able to read until his college years.[11] Access to his father’s library, largely written in Latin, also led to his proficiency in the Latin language, which he achieved by the age of 12. He also composed three hundred hexameters of Latin verse in a single morning for a special event at school at the age of 13.[12]

He enrolled in his father’s former university at age 15,[13] and completed his bachelor’s degree in philosophy in December 1662. He defended his Disputatio Metaphysica de Principio Individui, which addressed the principle of individuation, on June 9, 1663. Leibniz earned his master’s degree in philosophy on February 7, 1664. He published and defended a dissertation Specimen Quaestionum Philosophicarum ex Jure collectarum, arguing for both a theoretical and a pedagogical relationship between philosophy and law, in December 1664. After one year of legal studies, he was awarded his bachelor’s degree in Law on September 28, 1665.[citation needed]

In 1666, at age 20, Leibniz wrote his first book, On the Art of Combinations, the first part of which was also his habilitation thesis in philosophy.[14] His next goal was to earn his license and doctorate in Law, which normally required three years of study. In 1666, the University of Leipzig turned down Leibniz’s doctoral application and refused to grant him a doctorate in law, most likely due to his relative youth.[15][16] Leibniz subsequently left Leipzig.[17]

Leibniz then enrolled in the University of Altdorf, and almost immediately he submitted a thesis, which he had probably been working on earlier in Leipzig.[18] The title of his thesis was Disputatio Inauguralis De Casibus Perplexis In Jure. Leibniz earned his license to practice law and his Doctorate in Law in November 1666. He next declined the offer of an academic appointment at Altdorf, saying that “my thoughts were turned in an entirely different direction”.[19]

As an adult, Leibniz often introduced himself as “Gottfried von Leibniz”. Many posthumously published editions of his writings presented his name on the title page as “Freiherr G. W. von Leibniz.” However, no document has ever been found from any contemporary government that stated his appointment to any form of nobility.[20]

This section needs additional citations for verification. Please help improve this article by adding citations to reliable sources. Unsourced material may be challenged and removed. (March 2014)

Leibniz’s first position was as a salaried secretary to an alchemical society in Nuremberg.[21] He knew fairly little about the subject at that time but presented himself as deeply learned. He soon met Johann Christian von Boyneburg (1622–1672), the dismissed chief minister of the Elector of Mainz, Johann Philipp von Schönborn.[22] Von Boyneburg hired Leibniz as an assistant, and shortly thereafter reconciled with the Elector and introduced Leibniz to him. Leibniz then dedicated an essay on law to the Elector in the hope of obtaining employment. The stratagem worked; the Elector asked Leibniz to assist with the redrafting of the legal code for his Electorate.[23] In 1669, Leibniz was appointed Assessor in the Court of Appeal. Although von Boyneburg died late in 1672, Leibniz remained under the employment of his widow until she dismissed him in 1674.[citation needed]

Von Boyneburg did much to promote Leibniz’s reputation, and the latter’s memoranda and letters began to attract favorable notice. Leibniz’s service to the Elector soon followed a diplomatic role. He published an essay, under the pseudonym of a fictitious Polish nobleman, arguing (unsuccessfully) for the German candidate for the Polish crown. The main force in European geopolitics during Leibniz’s adult life was the ambition of Louis XIV of France, backed by French military and economic might. Meanwhile, the Thirty Years’ War had left German-speaking Europe exhausted, fragmented, and economically backward. Leibniz proposed to protect German-speaking Europe by distracting Louis as follows. France would be invited to take Egypt as a stepping stone towards an eventual conquest of the Dutch East Indies. In return, France would agree to leave Germany and the Netherlands undisturbed. This plan obtained the Elector’s cautious support. In 1672, the French government invited Leibniz to Paris for discussion,[24] but the plan was soon overtaken by the outbreak of the Franco-Dutch War and became irrelevant. Napoleon’s failed invasion of Egypt in 1798 can be seen as an unwitting, late implementation of Leibniz’s plan, after the Eastern hemisphere colonial supremacy in Europe had already passed from the Dutch to the British.[citation needed]

Thus Leibniz began several years in Paris. Soon after arriving, he met Dutch physicist and mathematician Christiaan Huygens and realised that his own knowledge of mathematics and physics was patchy. With Huygens as mentor, he began a program of self-study that soon pushed him to making major contributions to both subjects, including discovering his version of the differential and integral calculus. He met Nicolas Malebranche and Antoine Arnauld, the leading French philosophers of the day, and studied the writings of Descartes and Pascal, unpublished as well as published. He befriended a German mathematician, Ehrenfried Walther von Tschirnhaus; they corresponded for the rest of their lives. In 1675 he was admitted by the French Academy of Sciences as a foreign honorary member, despite his lack of attention to the academy.[citation needed]

When it became clear that France would not implement its part of Leibniz’s Egyptian plan, the Elector sent his nephew, escorted by Leibniz, on a related mission to the English government in London, early in 1673.[25] There Leibniz came into acquaintance of Henry Oldenburg and John Collins. He met with the Royal Society where he demonstrated a calculating machine that he had designed and had been building since 1670. The machine was able to execute all four basic operations (adding, subtracting, multiplying, and dividing), and the Society quickly made him an external member. The mission ended abruptly when news reached it of the Elector’s death, whereupon Leibniz promptly returned to Paris and not, as had been planned, to Mainz.[26]

The sudden deaths of his two patrons in the same winter meant that Leibniz had to find a new basis for his career. In this regard, a 1669 invitation from the Duke of Brunswick to visit Hanover proved fateful. Leibniz declined the invitation, but began corresponding with the Duke in 1671. In 1673, the Duke offered him the post of Counsellor which Leibniz very reluctantly accepted two years later, only after it became clear that no employment in Paris, whose intellectual stimulation he relished, or with the Habsburg imperial court was forthcoming.