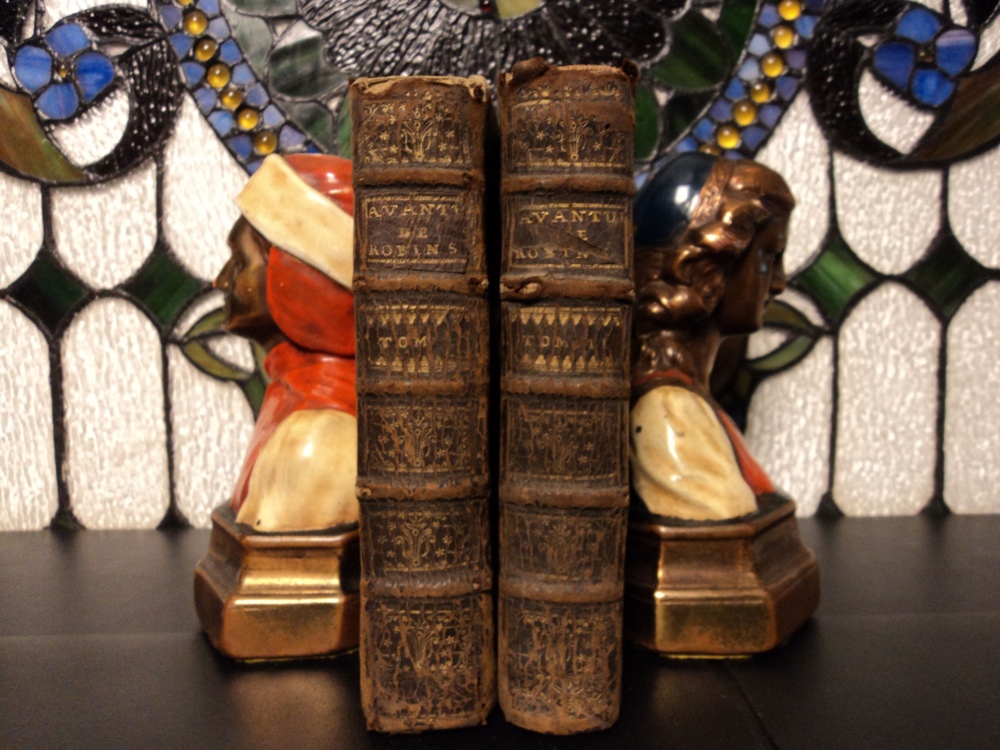 Robinson Crusoe is a novel by Daniel Defoe, first published on 25 April 1719. This first edition credited the work’s fictional protagonist Robinson Crusoe as its author, leading many readers to believe he was a real person and the book a travelogue of true incidents.

We do not find another example of this very rare 2nd edition set for sale anywhere else worldwide. We find the 1st French edition selling for $4500 and the 3rd 1727 edition at $1,100. 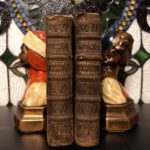 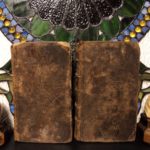 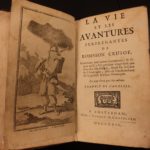 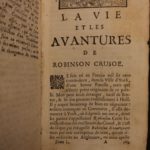 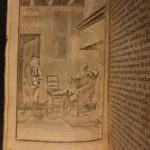 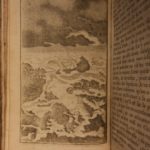 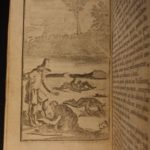 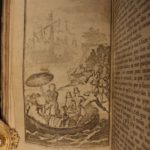 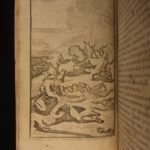 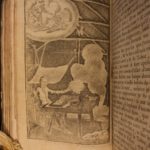 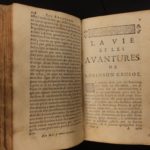 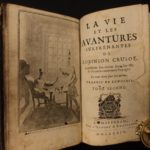 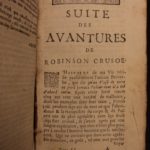 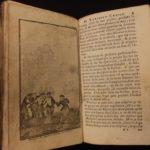 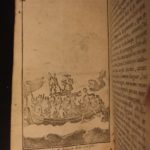 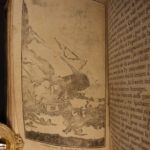 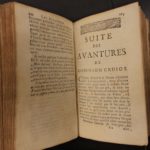 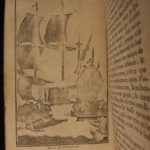 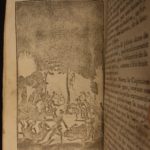 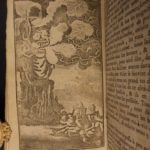 Robinson Crusoe is a novel by Daniel Defoe, first published on 25 April 1719. This first edition credited the work’s fictional protagonist Robinson Crusoe as its author, leading many readers to believe he was a real person and the book a travelogue of true incidents.

We do not find another example of this very rare 2nd edition set for sale anywhere else worldwide. We find the 1st French edition selling for $4500 and the 3rd 1727 edition at $1,100.

Robinson Crusoe /ˌrɒbɪnsən ˈkruːsoʊ/ is a novel by Daniel Defoe, first published on 25 April 1719. This first edition credited the work’s fictional protagonist Robinson Crusoe as its author, leading many readers to believe he was a real person and the book a travelogue of true incidents.[2] It was published under the considerably longer original title The Life and Strange Surprizing Adventures of Robinson Crusoe, Of York, Mariner: Who lived Eight and Twenty Years, all alone in an un-inhabited Island on the Coast of America, near the Mouth of the Great River of Oroonoque; Having been cast on Shore by Shipwreck, wherein all the Men perished but himself. With An Account how he was at last as strangely deliver’d by Pyrates. Epistolary, confessional, and didactic in form, the book is a fictional autobiography of the title character (whose birth name is Robinson Kreutznaer)—a castaway who spends years on a remote tropical island near Trinidad, encountering cannibals, captives, and mutineers before being rescued.

The story is widely perceived to have been influenced by the life of Alexander Selkirk, a Scottish castaway who lived for four years on the Pacific island called “Más a Tierra” (in 1966 its name was changed to Robinson Crusoe Island), Chile. However, other possible sources have been put forward for the text. It is possible, for example, that Defoe was inspired by the Latin or English translations of Ibn Tufail’s Hayy ibn Yaqdhan, an earlier novel also set on a desert island.[3][4][5][6] Another source for Defoe’s novel may have been Robert Knox’s account of his abduction by the King of Ceylon in 1659 in “An Historical Account of the Island Ceylon,” Glasgow: James MacLehose and Sons (Publishers to the University), 1911.[7] In his 2003 book In Search of Robinson Crusoe, Tim Severin contends that the account of Henry Pitman in a short book chronicling his escape from a Caribbean penal colony and subsequent shipwrecking and desert island misadventures, is the inspiration for the story. Arthur Wellesley Secord in his Studies in the narrative method of Defoe (1963: 21–111) painstakingly analyses the composition of Robinson Crusoe and gives a list of possible sources of the story, rejecting the common theory that the story of Selkirk is Defoe’s only source.

Despite its simple narrative style, Robinson Crusoe was well received in the literary world and is often credited as marking the beginning of realistic fiction as a literary genre. Before the end of 1719 the book had already run through four editions, and it has gone on to become one of the most widely published books in history, spawning numerous sequels and adaptations for stage, film, and television.

Pictorial map of Crusoe’s island, aka “Island of Despair,” showing incidents from the book

Crusoe (the family name corrupted from the German name “Kreutznaer”) sets sail from the Queen’s Dock in Hull on a sea voyage in August 1651, against the wishes of his parents, who want him to pursue a career, possibly in law. After a tumultuous journey where his ship is wrecked in a storm, his lust for the sea remains so strong that he sets out to sea again. This journey, too, ends in disaster as the ship is taken over by Salé pirates (the Salé Rovers) and Crusoe is enslaved by a Moor. Two years later, he escapes in a boat with a boy named Xury; a Captain of a Portuguese ship off the west coast of Africa rescues him. The ship is en route to Brazil. With the captain’s help, Crusoe procures a plantation.

Years later, Crusoe joins an expedition to bring slaves from Africa but he is shipwrecked in a storm about forty miles out to sea on an island (which he calls the Island of Despair) near the mouth of the Orinoco river on 30 September 1659. (The date was left blank in the first edition. The years added up after 1651, or, his total of years reckoned backwards from 1686 yield 1658 so the 1659 is an error. The story claims that he swam ashore on his 26th birthday.) The details of Crusoe’s island were probably based on the Caribbean island of Tobago, since that island lies a short distance north of the Venezuelan coast near the mouth of the Orinoco river, in sight of Trinidad.[8] He observes the latitude as 9 degrees and 22 minutes north. He sees penguins and seals on his island. (However, there are no seals and penguins living together in the Northern Hemisphere, only around the Galapagos Islands.) As for his arrival there, only he and three animals, the captain’s dog and two cats, survive the shipwreck. Overcoming his despair, he fetches arms, tools, and other supplies from the ship before it breaks apart and sinks. He builds a fenced-in habitat near a cave which he excavates. By making marks in a wooden cross, he creates a calendar. By using tools salvaged from the ship, and some he makes himself from “ironwood”, he hunts, grows barley and rice, dries grapes to make raisins, learns to make pottery, and raises goats. He also adopts a small parrot. He reads the Bible and becomes religious, thanking God for his fate in which nothing is missing but human society.

More years pass and Crusoe discovers native cannibals, who occasionally visit the island to kill and eat prisoners. At first he plans to kill them for committing an abomination but later realizes he has no right to do so, as the cannibals do not knowingly commit a crime. He dreams of obtaining one or two servants by freeing some prisoners; when a prisoner escapes, Crusoe helps him, naming his new companion “Friday” after the day of the week he appeared. Crusoe then teaches him English and converts him to Christianity. After more natives arrive to partake in a cannibal feast, Crusoe and Friday kill most of the natives and save two prisoners. One is Friday’s father and the other is a Spaniard, who informs Crusoe about other Spaniards shipwrecked on the mainland. A plan is devised wherein the Spaniard would return to the mainland with Friday’s father and bring back the others, build a ship, and sail to a Spanish port.

Before the Spaniards return, an English ship appears; mutineers have commandeered the vessel and intend to maroon their captain on the island. Crusoe and the ship’s captain strike a deal in which Crusoe helps the captain and the loyal sailors retake the ship and leave the worst mutineers on the island. Before embarking for England, Crusoe shows the mutineers how he survived on the island and states that there will be more men coming. Crusoe leaves the island 19 December 1686 and arrives in England on 11 June 1687. He learns that his family believed him dead; as a result, he was left nothing in his father’s will. Crusoe departs for Lisbon to reclaim the profits of his estate in Brazil, which has granted him much wealth. In conclusion, he transports his wealth overland to England to avoid travelling by sea. Friday accompanies him and, en route, they endure one last adventure together as they fight off famished wolves while crossing the Pyrenees.

Plaque in Queen’s Gardens, Hull—the former Queen’s Dock from which Crusoe sailed—showing him on his island

The book was published on 25 April 1719. Before the end of the year, this first volume had run through four editions.

By the end of the 19th century, no book in the history of Western literature had more editions, spin-offs and translations (even into languages such as Inuktitut, Coptic and Maltese) than Robinson Crusoe, with more than 700 such alternative versions, including children’s versions with mainly pictures and no text.[9]

The term “Robinsonade” was coined to describe the genre of stories similar to Robinson Crusoe.

Defoe went on to write a lesser-known sequel, The Farther Adventures of Robinson Crusoe. It was intended to be the last part of his stories, according to the original title-page of its first edition but a third part, Serious Reflections During the Life & Surprising Adventures of Robinson Crusoe, With His Vision of the Angelic World, was added later; it is a mostly forgotten series of moral essays with Crusoe’s name attached to give interest.

This section needs additional citations for verification. Please help improve this article by adding citations to reliable sources. Unsourced material may be challenged and removed. (April 2013)

There were many stories of real-life castaways in Defoe’s time. Defoe’s immediate inspiration for Crusoe is usually thought to be a Scottish sailor named Alexander Selkirk, who was rescued in 1709 by Woodes Rogers’ expedition after four years on the uninhabited island of Más a Tierra in the Juan Fernández Islands off the Chilean coast. Rogers’ “Cruising Voyage” was published in 1712, with an account of Alexander Selkirk’s ordeal. However, Robinson Crusoe is far from a copy of Woodes Rogers’ account: Selkirk was marooned at his own request, while Crusoe was shipwrecked; the islands are different; Selkirk lived alone for the whole time, while Crusoe found companions; while Selkirk stayed on his island for four years, not twenty-eight. Furthermore, much of the appeal of Defoe’s novel is the detailed and captivating account of Crusoe’s thoughts, occupations and activities which goes far beyond that of Rogers’ basic descriptions of Selkirk, which account for only a few pages. However, one must not forget that Defoe considered himself as the editor of the story. He was adamant to maintain his claim that the real author Robinson Crusoe had been a person still alive in 1719-20.

Tim Severin’s book Seeking Robinson Crusoe (2002) unravels a much wider and more plausible range of potential sources of inspiration, and concludes by identifying castaway surgeon Henry Pitman as the most likely. An employee of the Duke of Monmouth, Pitman played a part in the Monmouth Rebellion. His short book about his desperate escape from a Caribbean penal colony, followed by his shipwrecking and subsequent desert island misadventures, was published by J. Taylor of Paternoster Row, London, whose son William Taylor later published Defoe’s novel. Severin argues that since Pitman appears to have lived in the lodgings above the father’s publishing house and that Defoe himself was a mercer in the area at the time, Defoe may have met Pitman in person and learned of his experiences first-hand, or possibly through submission of a draft.[10]

Severin also discusses another publicised case of a marooned man named only as Will, of the Miskito people of Central America, who may have led to the depiction of Man Friday.[11]