An extremely popular, but rare 18th-century cookbook by Hannah Glasse!

The Art of Cookery made Plain and Easy is a cookbook by Hannah Glasse (1708–1770) first published in 1747. It was a best seller for a century after its first publication, dominating the English-speaking market and making Glasse one of the most famous cookbook authors of her time.

Hannah Glasse (1708 – 1770) was an English cookery writer of the 18th century. She is remembered mainly for her bestselling cookbook, The Art of Cookery made Plain and Easy, first published in 1747. 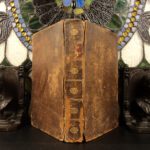 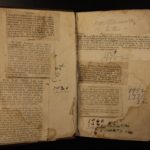 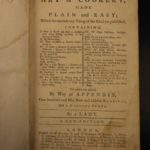 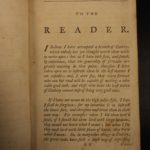 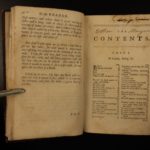 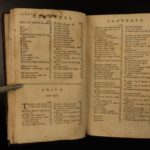 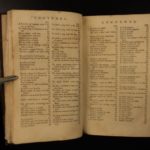 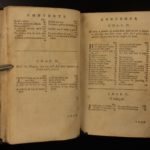 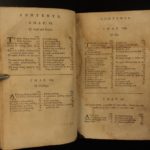 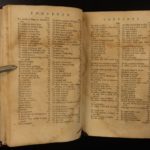 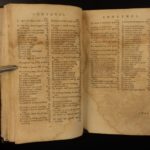 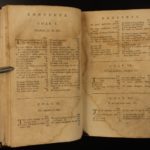 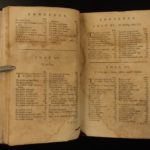 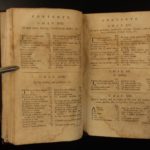 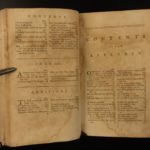 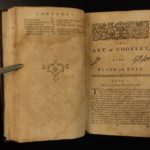 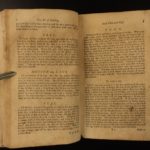 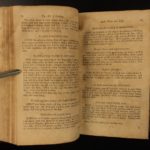 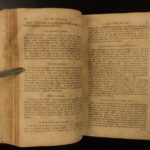 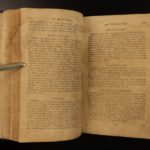 An extremely popular, but rare 18th-century cookbook by Hannah Glasse!

The Art of Cookery made Plain and Easy is a cookbook by Hannah Glasse (1708–1770) first published in 1747. It was a best seller for a century after its first publication, dominating the English-speaking market and making Glasse one of the most famous cookbook authors of her time.

Hannah Glasse (1708 – 1770) was an English cookery writer of the 18th century. She is remembered mainly for her bestselling cookbook, The Art of Cookery made Plain and Easy, first published in 1747.

Title: The art of cookery, made plain and easy : which far exceeds any thing of the kind yet published. Containing, I. How to Roast and Boil to Perfection every Thing necessary to be sent up to Table. II. Of Made-Dishes. III. How expensive a French Cook’s Sauce is. IV. To make a Number of pretty little Dishes for a Supper or Side-Dish, and little Corner-Dishes for a great Table. V. To dress Fish. VI. Of Soops aud Broths. Vii. Of Puddings. Viii. Of Pies. IX. For a Lent Dinner ; a Number of good Dishes, which you may make use of at any other time. X. Directions to prepare proper Food for the Sick. XI. For Captains of Ships ; how to make all useful Things for a Voyage ; and setting out a Table on board a Ship. XII. Of Hogs Puddings, Sausages, &c. XIII. To pot and make Hams, &c. XIV. Of Pickling. XV. Of making Cakes, &c. XVI. Of Cheese-Cakes, Creams, Jellies, Whipt. Syllabubs, &c. XVII. Of made Wines, Brewing, French Bread, Muffins, &c. XVIII. Jarring Cherries and Preserves, &c. XIX. To make Anchovies, Vermicella, Catchup, Vinegar, and to keep Artichokes, French Beans, &c. XX. Of Distilling. XXI. How to market ; the Seasons of the Year for Butchers Meat, Poultry, Fish, Herbs, Roots, and Fruit. XXII. A certain Cure for the Bite of a Mad Dog. By Dr. Mead. XXIII. A Receipt to keep clear from Buggs. To which are added, by way of appendix, one hundred and fifty new and Useful receipts, And a Copious Index. By a lady.

Pages: complete with all 384 pages; plus indexes, prefaces, and such

The Art of Cookery made Plain and Easy is a cookbook by Hannah Glasse (1708–1770) first published in 1747. It was a best seller for a century after its first publication, dominating the English-speaking market and making Glasse one of the most famous cookbook authors of her time. The book ran through at least 40 editions, many of them pirated. It was published in Dublin from 1748, and in America from 1805.

Glasse emphasised in her note “To the Reader” that she used plain language so that servants would be able to understand it.

The 1751 edition was the first book to mention trifle with jelly as an ingredient; the 1758 edition gave the first mention of “Hamburgh sausages” and piccalilli, while the 1774 edition of the book included one of the first recipes in English for an Indian-style curry. Glasse expressed criticism of French influence, but included dishes with French names and French influence in the book. Other recipes use imported ingredients such as cocoa, cinnamon, nutmeg, pistachios and even musk.

The book was popular in the Thirteen Colonies of America, and its appeal survived the American War of Independence, copies being owned by Benjamin Franklin, Thomas Jefferson and George Washington.

The Art of Cookery was the dominant reference for home cooks in much of the English-speaking world in the second half of the 18th century and the early 19th century, and it is still used as a reference for food research and historical reconstruction. The book was updated significantly both during her life and after her death.

Hannah Glasse’s signature at the top of the first chapter of her book, 6th Edition, 1758, in an attempt to reduce plagiarism

Early editions were not illustrated. Some posthumous editions include a decorative frontispiece, with the caption

The FAIR, who’s Wise and oft consults our BOOK,

With CHOICEST VIANDS, has her Table Crown’d,

And Health, with Frugal Ellegance is found.

Some of the recipes were plagiarised, to the extent of being reproduced verbatim from earlier books by other writers.[1] To guard against plagiarism, the title page of for example the sixth edition (1758) carries at its foot the warning “This BOOK is published with his MAJESTY’s Royal Licence; and whoever prints it, or any Part of it, will be prosecuted”. In addition, the first page of the main text is signed in ink by the author.

The first edition of the book was published by Glasse herself, funded by subscription, and sold (to non-subscribers) at Mrs. Ashburn’s China Shop.[2]

Chapter 3: Read this Chapter, and you will find how expensive a French Cook’s Sauce is.

Chapter 4: To make a Number of pretty little Dishes fit for a Supper, or Side-Dish, and little Corner-Dishes for a Great Table; and the rest you have in the Chapter for Lent.

Chapter 6: Of Soops and Broths.

Chapter 9: For a Fast-Dinner, a Number of good Dishes, which you may make use of for a Table at any other Time.

Chapter 10: Directions for the Sick.

Chapter 11: For Captains of Ships.

Chapter 21: How to market, and the Seasons of the Year for Butchers Meat, Poultry, Fish, Herbs, Roots, &c and Fruit.

Contents of the Appendix.

COVER the bottom of your dish or bowl with Naples biscuits broke in pieces, mackeroons broke in halves, and ratafia cakes. Just wet them all through with sack, then make a good boiled custard not too thick, and when cold pour it over it, then put a syllabub over that. You may garnish it with ratafia cakes, currant jelly, and flowers.[4]

The book has a brief table of contents on the title page, followed by a note “To the Reader”, and then a full list of contents, by chapter, naming every recipe. There is a full alphabetical index at the back.

Glasse explains in her note “To the Reader” that she has written simply, “for my Intention is to instruct the lower Sort”, giving the example of larding a chicken: she does not call for “large Lardoons, they would not know what I meant: But when I say they must lard with little Pieces of Bacon, they know what I mean.” And she comments that “the great Cooks have such a high way of expressing themselves, that the poor Girls are at a Loss to know what they mean.”[5]

As well as simplicity, to suit her readers in the kitchen, Glasse stresses her aim of economy: “some Things [are] so extravagant, that it would be almost a Shame to make Use of them, when a Dish can be made full as good, or better, without them.”[6]

Chapters sometimes begin with a short introduction giving general advice on the topic at hand, such as cooking meat; the recipes occupy the rest of the text. The recipes give no indication of cooking time or oven temperature.[7] There are no separate lists of ingredients: where necessary, the recipes specify quantities directly in the instructions. Many recipes do not mention quantities at all, simply instructing the cook what to do, thus:

LARKS, roast them, and for Sauce have Crumbs of Bread; done thus: Take a Sauce-pan or Stew-pan and some Butter; when melted, have a good Piece of Crumb of Bread, and rub it in a clean Cloth to Crumbs, then throw it into your Pan; keep stirring them about till they are Brown, then throw them into a Sieve to drain, and lay them round your Larks.[8]

Glasse used costly truffles in some recipes, despite her dislike of French cuisine.

Glasse set out her views of French cuisine in the book’s introduction: “I have indeed given some of my Dishes French Names to distinguish them, because they are known by those names; And where there is great Variety of Dishes, and a large Table to cover, so there must be Variety of Names for them; and it matters not whether they be called by a French, Dutch, or English Name, so they are good, and done with as little Expence as the Dish will allow of.”[9] An example of such a recipe is “To à la Daube Pigeons”;[10] a daube is a rich French meat stew from Provence, traditionally made with beef.[11] Her “A Goose à la Mode” is served in a sauce flavoured with red wine, home-made “Catchup”, veal sweetbread, truffles, morels, and (more ordinary) mushrooms.[12] She occasionally uses French ingredients; “To make a rich Cake” includes “half a Pint of right French[b] Brandy”, as well as the same amount of “Sack” (Spanish sherry).[12]

Ingredients from faraway countries were becoming available. The recipe for “Elder-Shoots, in Imitation of Bamboo” makes use of a homely ingredient to substitute for a foreign one that English travellers had encountered in the Far East. The same recipe also calls for a variety of imported spices to flavour the pickle: “an Ounce of white or red Pepper, an Ounce of Ginger sliced, a little Mace, and a few Corns of Jamaica Pepper.