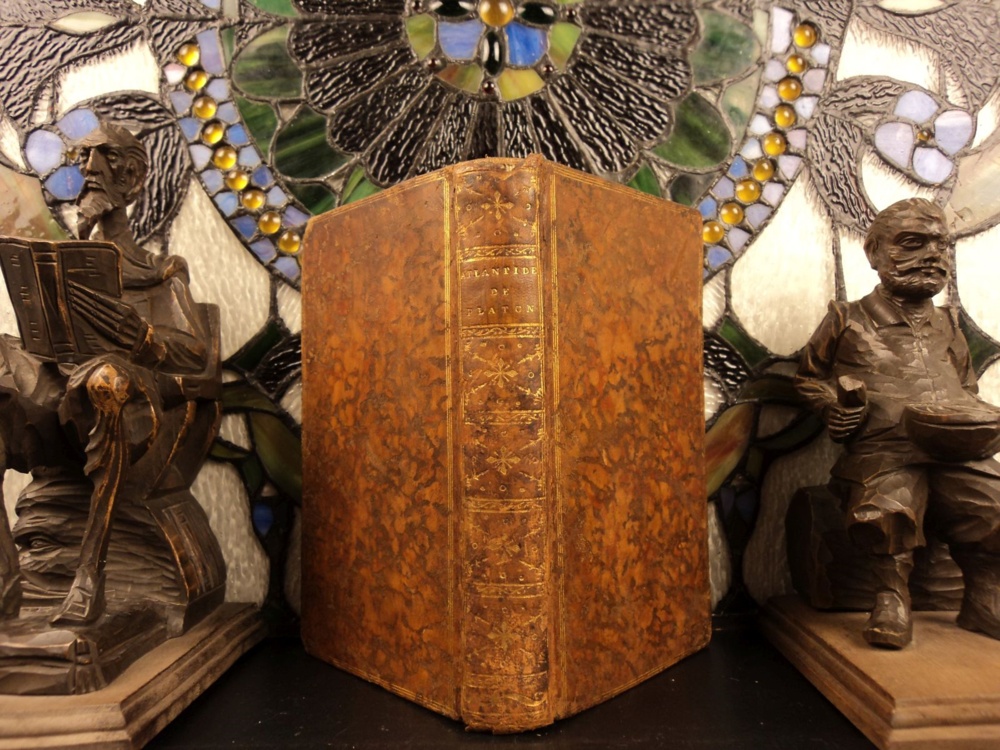 A rare first edition book of a collection of letters written in response to Voltaire’s origins of astronomy. Among the letters are topics that address the location of the city of Atlantis of Plato!

Jean Sylvain Bailly (1736 – 1793) was a French astronomer, mathematician, freemason, and political leader of the early part of the French Revolution. He presided over the Tennis Court Oath, served as the mayor of Paris from 1789 to 1791, and was ultimately guillotined during the Reign of Terror. 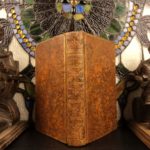 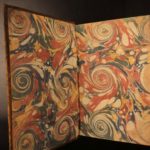 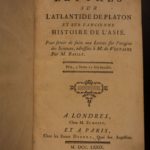 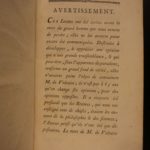 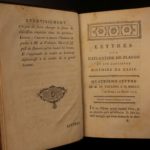 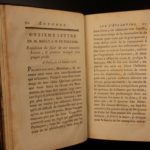 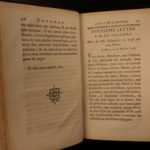 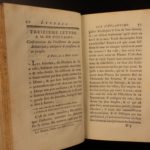 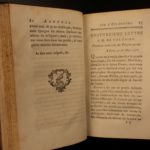 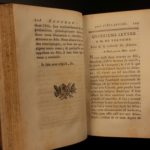 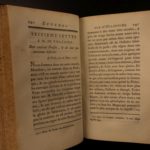 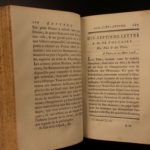 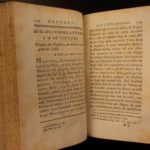 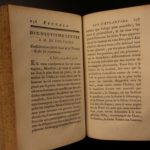 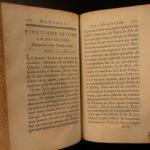 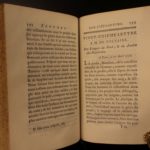 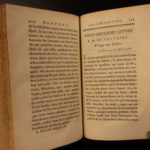 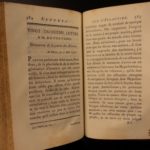 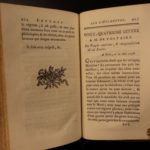 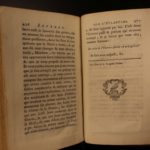 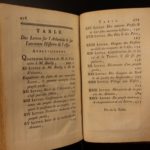 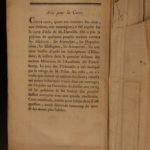 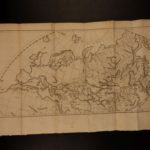 A rare first edition book of a collection of letters written in response to Voltaire’s origins of astronomy. Among the letters are topics that address the location of the city of Atlantis of Plato!

Jean Sylvain Bailly (1736 – 1793) was a French astronomer, mathematician, freemason, and political leader of the early part of the French Revolution. He presided over the Tennis Court Oath, served as the mayor of Paris from 1789 to 1791, and was ultimately guillotined during the Reign of Terror.

Pages: complete with all 480 pages; plus, indexes, prefaces, and such

Jean Sylvain Bailly (French: [bɑji]; 15 September 1736 – 12 November 1793) was a French astronomer, mathematician, freemason,[1][2] and political leader of the early part of the French Revolution. He presided over the Tennis Court Oath, served as the mayor of Paris from 1789 to 1791, and was ultimately guillotined during the Reign of Terror.

Born in Paris, Bailly was the son of Jacques Bailly, an artist and supervisor of the Louvre, and was the grandson of Nicholas Bailly, also an artist and a court painter. As a child he originally intended to follow in his family tradition and pursue a career in the arts, but he became deeply attracted to science, particularly astronomy, by the influence of Nicolas de Lacaille. An excellent student with a “particularly retentive memory and inexhaustible patience”,[3] he calculated an orbit for the next appearance of Halley’s Comet (in 1759), and correctly reduced Lacaille’s observations of 515 stars. He participated in the construction of an observatory at the Louvre. For such achievements he was elected to the French Academy of Sciences in 1763.[3]

Bailly published his Essay on the theory of the satellites of Jupiter in 1766,a an expansion of a presentation he had made to the Academy in 1763. It was followed up in 1771 by a noteworthy dissertation, On the inequalities of light of the satellites of Jupiter.b and in 1778, he was elected a foreign member of the Royal Swedish Academy of Sciences.

Bailly also gained a high literary reputation by his Éloges of King Charles V of France, Lacaille, Molière, Pierre Corneille and Gottfried Leibniz, which were issued in collected form in 1770 and 1790. He was admitted to the Académie française on 26 February 1784, and to the Académie des Inscriptions in 1785, when Bernard le Bovier de Fontenelle’s simultaneous membership of all three Academies was renewed in him. From then on, Bailly devoted himself to the history of science, publishing A history of ancient astronomy c in 1775, followed by A history of modern astronomy (3 vols., 1782).d Other works include Discourse on the origin of the sciences and the peoples of Asia (1777);e Discourse on Plato’s ‘Atlantide’ (1779);f and A treatise on Indian and Oriental astronomy (1787).g Though his works were “universally admired” by contemporaries,[3] later commentators have remarked that “their erudition was… marred by speculative extravagances.”[4]

The lunar crater Bailly was named in his honour.

During the French Revolution[edit]

This section does not cite any sources. Please help improve this section by adding citations to reliable sources. Unsourced material may be challenged and removed. (November 2012)

The Revolution interrupted his studies. Elected deputy from Paris to the Estates-General (12 May 1789), he was elected inaugural president of the National Assembly (17 June 1789), and led the famous proceedings in the Tennis Court (20 June), being the first to take the Tennis Court Oath. Shortly after the storming of the Bastille (14 July 1789) he became the first mayor of Paris under the newly adopted system of the Commune (15 July 1789 to 16 November 1791).

Sketch by Jacques-Louis David of the Tennis Court Oath. Bailly is pictured in the centre, facing the viewer, his right hand raised.

J.S.Bailly, by Garneray and Alix, after the David’s scene above

When Louis XVI made his momentous visit to the Hôtel de Ville to endorse the Revolution (17 July), Bailly presented him with the new symbol of the revolution, the tricolour cockade. Along with the Marquis de Lafayette, he is considered the indisputable hero of the early days of the revolution.[who?]

In his function as mayor, he was attacked by Camille Desmoulins and Jean-Paul Marat as too conservative. He continuously sought to promote the authority of the mayor while limiting the power of the General Assembly of the Commune.

One of his actions in this position was to secure, with others, and in the face of threats and ridicule, the passage of a decree of 27 September 1791 (confirmed by Legislative Assembly on 30 November of the same year), which declared Jews to be French citizens, with all rights and privileges. This decree repealed the special taxes that had been imposed on the Jews, as well as all the ordinances existing against them.

After a failed attempt by the royal family to flee the country, Bailly tried to contain the growing republican crowds asking for the King to step down. On 17 July 1791, he ordered the dispersal by the National Guard of the riotous assembly in the Champ de Mars. Having suddenly become extremely unpopular, he resigned on 12 November and moved to Nantes where he composed his Mémoires d’un témoin (published in 3 vols. by MM. Berville and Barrière, 1821–1822), an incomplete narrative of the extraordinary events of his public life. He was replaced as mayor by Jerôme Pétion on 16 November.

In July 1793, Bailly left Nantes to join his friend Pierre Simon Laplace at Melun, but was there recognised and arrested. On 14 October, he was pressed to testify against Marie Antoinette but refused. On 10 November, he was brought before the Revolutionary Tribunal in Paris, speedily tried, and sentenced to death the next day. On 12 November, he was guillotined at the Champs de Mars, a site selected symbolically as the location of his betrayal of the democratic movement. He was forced to endure the freezing rain and the insults of a howling mob. When a scoffer shouted, “Tu trembles, Bailly?” (“Do you tremble, Bailly?”), he stoically responded, “Oui, mais c’est seulement de froid.” (“Yes, but it is only the cold.”) In the words of the 1911 Encyclopædia Britannica, “He met his death with patient dignity; having, indeed, disastrously shared the enthusiasms of his age, but taken no share in its crimes.”