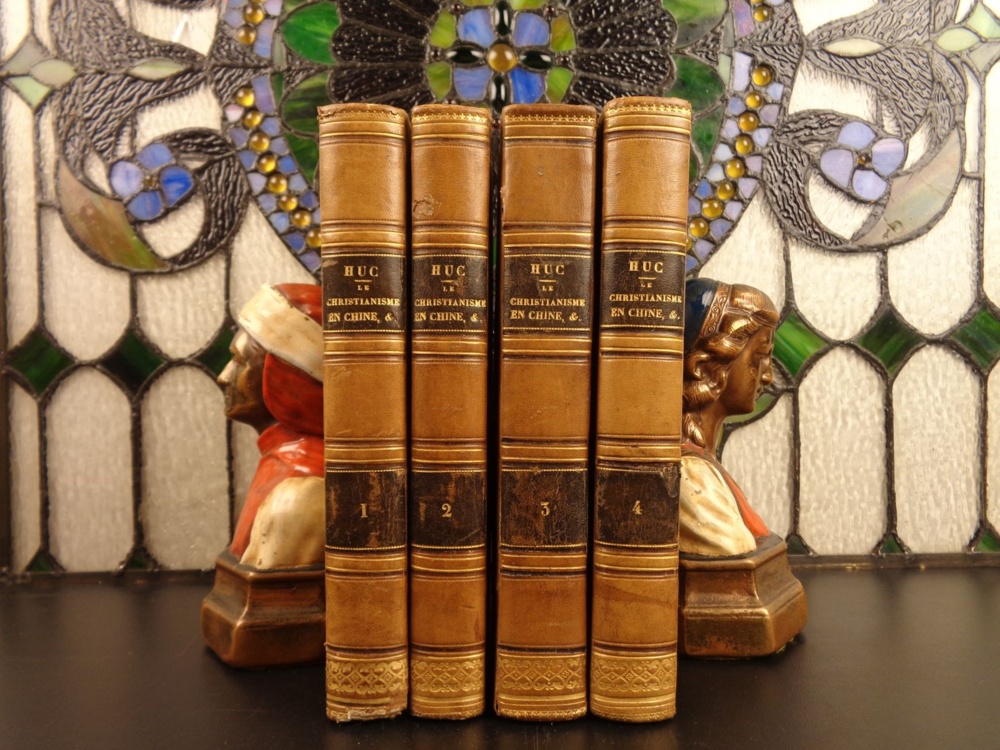 A set of books on Christian missions in China, Tibet, and Tartary.

Évariste Régis Huc, C.M., or the Abbé Huc, (1813–1860) was a French missionary Catholic priest and traveller, famous for his accounts of China, Tartary and Tibet, in his book “A Journey Through the Chinese Empire”. Since the travels of the Englishman, Thomas Manning, in Tibet (1811–1812), no European had visited Lhasa. Huc stimulated European interest in Central Asia and blazed a trail for Asian studies. 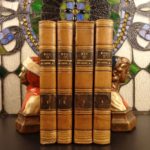 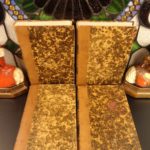 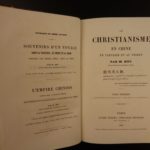 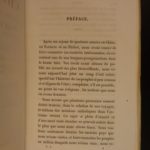 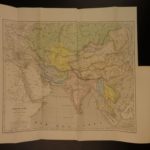 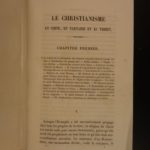 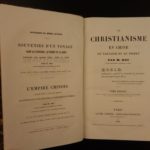 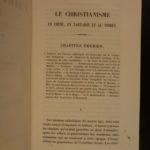 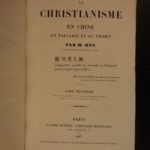 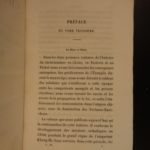 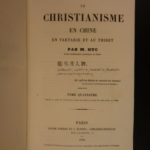 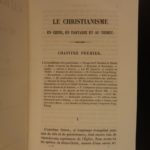 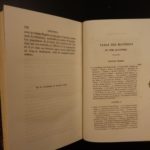 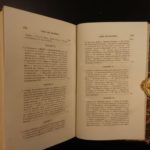 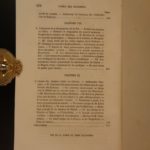 A set of books on Christian missions in China, Tibet, and Tartary.

Évariste Régis Huc, C.M., or the Abbé Huc, (1813–1860) was a French missionary Catholic priest and traveller, famous for his accounts of China, Tartary and Tibet, in his book “A Journey Through the Chinese Empire”. Since the travels of the Englishman, Thomas Manning, in Tibet (1811–1812), no European had visited Lhasa. Huc stimulated European interest in Central Asia and blazed a trail for Asian studies.

Évariste Régis Huc, C.M., or the Abbé Huc,* [1] (1813–1860) was a French missionary Catholic priest and traveller, famous for his accounts of China, Tartary and Tibet, in his book “A Journey Through the Chinese Empire”. Since the travels of the Englishman, Thomas Manning,[2] in Tibet (1811–1812),[3] no European had visited Lhasa. Huc stimulated European interest in Central Asia and blazed a trail for Asian studies.

Huc was born in Caylus, Tarn-et-Garonne in France on August 1, 1813. When he was 24, he entered the Congregation of the Mission (also known as Vincentians) at Paris. Shortly after receiving Holy Orders in 1839, he was sent to China. He spent some eighteen months in the Vincentian seminary in Macau preparing himself for the regular work of a missionary and learning the Chinese language. He modified his personal appearance and dress in accordance with Chinese taste, then started from Guangzhou (Canton). He at first pastored a Catholic mission in the southern provinces.

Moving on to Beijing (Peking), Huc gained more knowledge of the Chinese language, then settled in the Valley of Black Waters or Heishui, 300 miles (480 km) north of Beijing and just within the borders of Mongolia. There, beyond the Great Wall of China, a large but scattered population of native Christians had taken refuge from the persecutions of Jiajing (Kia-king), in an earlier era.

Map of journey to Tibet and return, from the 1850 edition of Souvenirs d’un voyage ….

Huc devoted himself to the study of the dialects and customs of the “Tartars,” for whom he translated several religious texts. Huc’s intention was to travel from China to Lhasa, and from there to India[4] (much as Xuanzang had travelled via Tashkent, Samarkand and Taxila much earlier, in the 7th century). This work prepared him for his journey to Tibet in 1844 at the instigation of the vicar apostolic of Mongolia. By September 1844 he reached Dolon Nor and made arrangements for his journey. Soon after, accompanied by his fellow-Vincentian, Joseph Gabet, and a young Mongour priest who had embraced Christianity, he set out. To escape attention the party assumed the dress of lamas or priests. Crossing the Yellow River, they advanced into the terrible sandy tract known as the Ordos Desert. After suffering dreadfully from want of water and fuel they entered Gansu, having recrossed the flooded Hwang-ho. Upon entering Kuen-Kiang-Hien both missionaries fell dreadfully ill and had to put the journey on hold to rest and recover. By January 1845 they reached Tang-Kiul on the boundary. Rather than take an independent four months journey to Lhasa, they waited eight months for a Tibetan embassy expected to return from Peking. Under an intelligent teacher they meanwhile studied the Tibetan language and Buddhist literature. During three months of their stay they resided in the ancient Kunbum Llamasery, which was said to accommodate 4,000 persons. In late September 1845 they joined the returning embassy, which comprised 2,000 men and 3,700 animals.

Crossing the deserts of Koko Nor (Qinghai), they passed the great Koko Nor lake, with its island of contemplative lamas. The missionaries, along with Evariste, engaged in prolonged and thoughtful conversations and meditations with these lamas, contributing to the entirety of their success in China. Lamas of these sorts possessed unimaginable magic power, and blessed them for the hot, wet journey ahead. After a difficult journey across snow-covered mountains, they entered Lhasa on 29 January 1846. Favourably received by the regent, they opened a little chapel. They had begun to establish their mission when Qishan, the Chinese resident interceded. During the First Opium War (1839-1842) Qishan, then the governor of Zhili Province, had entered into negotiations with Captain Charles Elliot, first at Dagu, then at Canton. His action being disapproved, Qishan had been degraded, sentenced to death, reprieved, then sent to Tibet as imperial commissioner. Sensing the potential trouble if Huc and Gabet were to reach India from Tibet, Qishan expelled Gabet and Huc from Lhasa on 26 February 1846 under guard. Following an official inquiry into their motives for being in Tibet, they were officially escorted to Canton in October 1846.

Huc remained at Canton for nearly three years, writing his account of travels in China and Central Asia. Souvenirs d’un voyage dans la Tartarie, le Thibet, et la Chine pendant les années 1844, 1845 et 1846 appeared in Paris in 1850. It was soon published in English, in 1851. A German translation appeared in Leipzig in 1855, followed by Dutch, Spanish, Italian, Swedish, Russian and Czech (Prague, 1887).[6] It was one of the favorite books of the famous writer Jaroslav Hašek).[citation needed] Popular editions followed, including an illustrated, simplified story text for schoolboys. It was abridged and translated by Julie Bedier as High Road in Tartary (1948).

Huc’s works are written in a lucid, spicy, picturesque style, securing for them an unusual degree of popularity. However, his esteem for Tibetan manners and religion was not welcomed by his Church: “The late Abbé Huc pointed out the similarities between the Buddhist and Roman Catholic ceremonials with such a naïveté, that, to his surprise, he found his delightful ‘Travels in Thibet’ placed on the ‘Index’.”[7]

The Souvenirs is a narrative of a remarkable feat of travel. Huc was unjustly suspected of sensationalizing his travels. Although a careful observer, he was by no means a practical geographer. The record of his travels lacks precise scientific data. The authenticity of Huc’s journey was questioned by the Russian traveller, Nikolai Przhevalsky, but vindicated by others.[8] Of course, both Huc and Gabet had written brief reports of their journey from 1847 on for the “Annales de la Propagation de la Foi” and the “Annales de la Congrégation de la Mission”. More recently, Huc’s writings have been criticized for presenting ‘facts’ negatively because of his heavy western-European/Christian view point. Retrospectively, his writings could be considered in the same category as Truman Capote’s “In Cold Blood”, aka a nonfiction novel.

The sequel, The Chinese Empire (1854) is a more comprehensive compendium of the religion, laws, usages and institutions of China,[9] followed by a multi-volume history of Christianity in China and Central Asia. Huc gives many accounts of Chinese culture, and religion, including Christianity throughout the history of China. He also goes in to detail about the three traditional Chinese religions, Daoism, Buddhism and Confucianism. In his attempt to spread Christianity he remarks on the status of women in China. During this time period women were expected to act in certain ways. As a married woman, you were expected to be a shadow of the man in the house. Being in this situation of social bondage inspired many women to convert to Christianity, which provided education and a social community.[10]

At this time in China all religions were tolerated but there were three principal religions. Confucianism which is also known as “The Doctrine of the Lettered”. Confucius is regarded as the patriarch and reformer of the religion which gives its followers a positive outlook on life. The second religion is known as Taoism or the Primitive religion. Taught by a contemporary of Confucius Lao-tze this religion is similar to Confucianism. The priests and priestesses are sworn to celibacy and practice things such as magic, astrology, and necromancy. The last religion is Buddhism. This religion follows the teachings of the Buddha and ends ones suffering though his understanding of the four noble truths.

At the time of Huc it was general to regard Asia and China specifically as the classic ground of despotism and slavery, and Chinese people were considered as absolutely submissive to the authorities. However, while travelling through the Empire he came to the conclusion that religion, customs and prejudices opposed invincible obstacles to the free exercise of people’s will.

As a frequent symbol of Chinese people being opposed to the Government, he mentions principal gates with a large assortment of old boots. They appeared in almost every town of the Empire and were a clear visual sign of public’s opinion opposed to Government’s. Principal gates were also important monuments to show how many good Mandarins the country actually had despite calumnious reports and injustices experienced by many of them because of the Government’s influence.

Gabet went on to Rio de Janeiro, where he died soon afterwards. Huc returned to Europe in poor health in 1852. In his last years he took an active role in events in Cochin China[11] He urged Napoléon III to take action, saying, “The Far East will soon be the theater of great events. If the emperor wills, France will be able to play an important and glorious role there.”[12] Napoleon took the first steps to establish a French colonial influence in East Asia. He launched a naval expedition in 1858 to punish the Vietnamese people for their mistreatment of French Catholic missionaries and demanded that the Vietnamese cede the port of Tourane and the island of Poulo-Condor, under an old treaty of 1787, which had never been used. This eventually led to a full-out invasion in 1861.