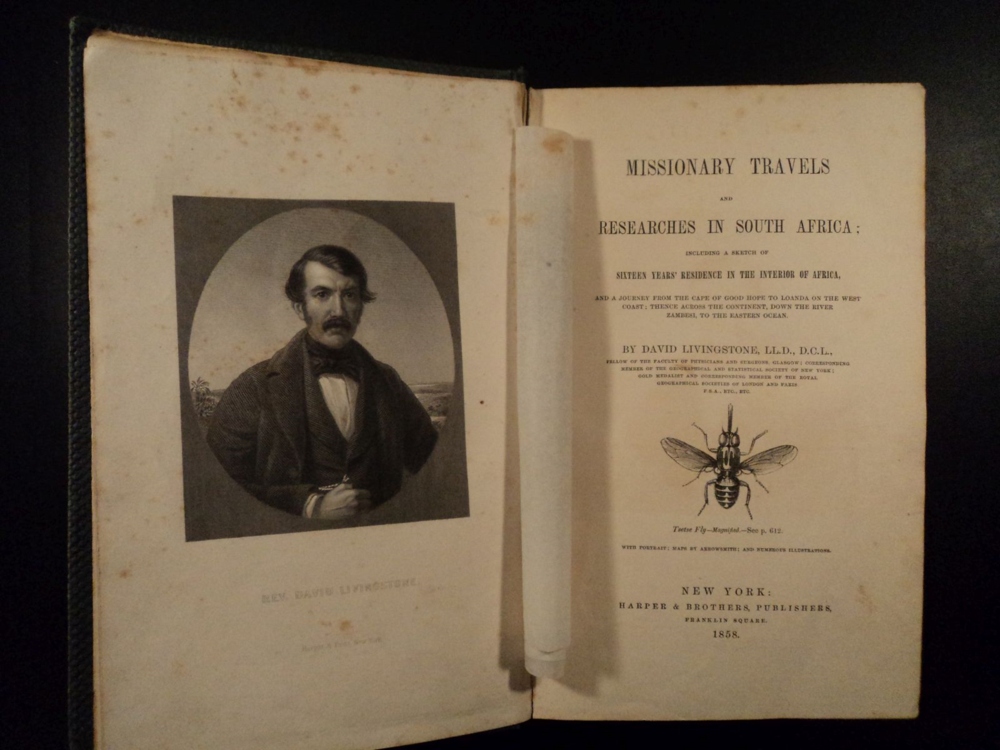 David Livingstone (1813 – 1873) was a Scottish Congregationalist pioneer medical missionary with the London Missionary Society and an explorer in Africa. His meeting with H. M. Stanley on 10 November 1871 gave rise to the popular quotation “Dr. Livingstone, I presume?” Livingstone was one of the most popular national heroes of the late 19th century in Victorian Britain, and he had a mythical status which operated on a number of interconnected levels: Protestant missionary martyr, working-class “rags to riches” inspirational story, scientific investigator and explorer, imperial reformer, anti-slavery crusader, and advocate of commercial empire.

We find other examples of this same 1st American edition for sale elsewhere for $935. 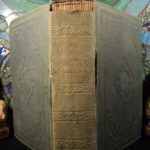 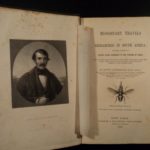 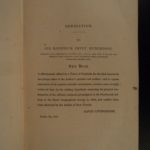 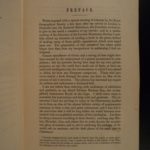 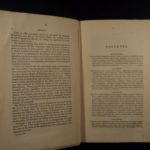 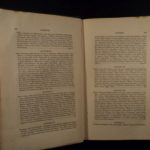 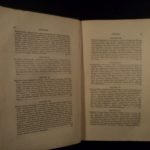 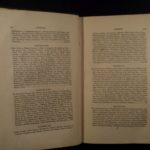 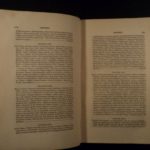 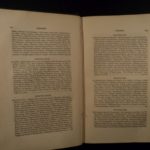 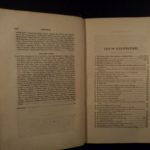 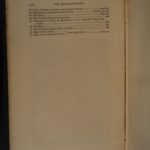 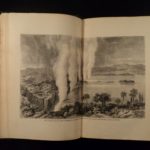 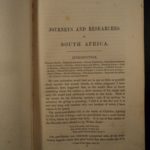 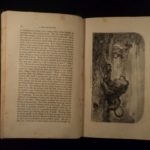 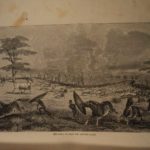 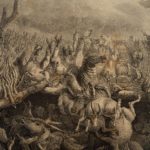 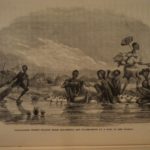 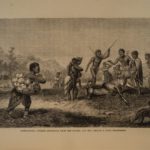 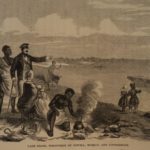 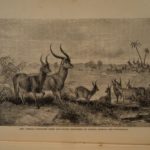 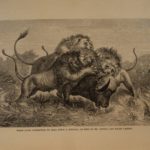 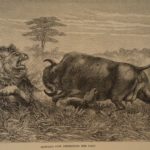 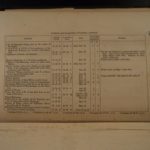 David Livingstone (1813 – 1873) was a Scottish Congregationalist pioneer medical missionary with the London Missionary Society and an explorer in Africa. His meeting with H. M. Stanley on 10 November 1871 gave rise to the popular quotation “Dr. Livingstone, I presume?” Livingstone was one of the most popular national heroes of the late 19th century in Victorian Britain, and he had a mythical status which operated on a number of interconnected levels: Protestant missionary martyr, working-class “rags to riches” inspirational story, scientific investigator and explorer, imperial reformer, anti-slavery crusader, and advocate of commercial empire.

We find other examples of this same 1st American edition for sale elsewhere for $935.

Title: Missionary travels and researches in South Africa : including a sketch of sixteen years’ residence in the interior of Africa, and a journey from the Cape of Good Hope to Loanda on the west coast; thence across the continent, down the Zambesi, to the eastern ocean

Pages: complete with all xxiv + 732 pages; plus indexes, prefaces, and such

David Livingstone (19 March 1813 – 1 May 1873) was a Scottish Congregationalist pioneer medical missionary with the London Missionary Society and an explorer in Africa. His meeting with H. M. Stanley on 10 November 1871 gave rise to the popular quotation “Dr. Livingstone, I presume?” Livingstone was one of the most popular national heroes of the late 19th century in Victorian Britain, and he had a mythical status which operated on a number of interconnected levels: Protestant missionary martyr, working-class “rags to riches” inspirational story, scientific investigator and explorer, imperial reformer, anti-slavery crusader, and advocate of commercial empire. His fame as an explorer helped drive forward the obsession with discovering the sources of the River Nile that formed the culmination of the classic period of European geographical discovery and colonial penetration of the African continent.[citation needed]

At the same time, his missionary travels, “disappearance” and death in Africa, and subsequent glorification as posthumous national hero in 1874 led to the founding of several major central African Christian missionary initiatives carried forward in the era of the European “Scramble for Africa”.[1]

David Livingstone’s birthplace The National Trust, having taken over the running of the museum from the original Trust, has recreated the look of the room of Livingstone’s family using furnishings and artefacts from around 1800.

David Livingstone was born on 19 March 1813 in the mill town of Blantyre, Scotland in a tenement building for the workers of a cotton factory on the banks of the River Clyde under the bridge crossing into Bothwell.[2] He was the second of seven children born to Neil Livingstone (1788–1856) and his wife Agnes (née Hunter; 1782–1865). David was employed at the age of 10 in the cotton mill of Henry Monteith & Co. in Blantyre Works. He and his brother John worked twelve-hour days as piecers, tying broken cotton threads on the spinning machines. He was a student at the Charing Cross Hospital Medical School from 1838–40; his courses covered medical practice, midwifery, and botany.

Neil Livingstone was a Sunday school teacher and teetotaller who handed out Christian tracts on his travels as a door to door tea salesman, and who extensively read books on theology, travel, and missionary enterprises. This rubbed off on the young David, who became an avid reader, but he also loved scouring the countryside for animal, plant, and geological specimens in local limestone quarries. Neil Livingstone had a fear of science books as undermining Christianity and attempted to force his son to read nothing but theology, but David’s deep interest in nature and science led him to investigate the relationship between religion and science.[3] In 1832, he read Philosophy of a Future State, written by Thomas Dick, and he found the rationale that he needed to reconcile faith and science and, apart from the Bible, this book was perhaps his greatest philosophical influence.[4]

Other significant influences in his early life were Thomas Burke, a Blantyre evangelist and David Hogg, his Sabbath school teacher.[4] At age nineteen, David and his father left the Church of Scotland for a local Congregational church, influenced by preachers like Ralph Wardlaw, who denied predestinatarian limitations on salvation. Influenced by American revivalistic teachings, Livingstone’s reading of missionary Karl Gützlaff’s Appeal to the Churches of Britain and America on behalf of China enabled him to persuade his father that medical study could advance religious ends.[5]

Livingstone’s experiences in H. Monteith’s Blantyre cotton mill were also important from ages 10 to 26, first as a piecer and later as a spinner. This work was necessary to support his impoverished family; it was monotonous, but it taught him persistence, endurance, and a natural empathy with all who labour, as expressed by lines that he used to hum from the egalitarian Rabbie Burns song: “When man to man, the world o’er/Shall brothers be for a’ that”.[6]

Livingstone attended Blantyre village school along with the few other mill children with the endurance to do so despite their 14-hour workday (6 am–8 pm), but having a family with a strong, ongoing commitment to study also reinforced his education. After reading the appeal by Gutzlaff for medical missionaries for China in 1834, he began saving money and entered Anderson’s College, Glasgow in 1836 (now University of Strathclyde), founded to bring science and technology to ordinary folk, and attended Greek and theology lectures at the University of Glasgow.[7] To enter medical school, he required some knowledge of Latin. A local Roman Catholic named Daniel Gallagher helped him learn Latin to the required level. Later in life, Gallagher became a priest and founded the third oldest Catholic Church in Glasgow: St Simon’s, Partick (originally named St Peter’s). A painting of both Gallagher and Livingstone by Roy Petrie[who?] hangs in that church’s coffee room. In addition, he attended divinity lectures by Wardlaw, a leader at this time of vigorous anti-slavery campaigning in the city. Shortly after, he applied to join the London Missionary Society (LMS) and was accepted subject to missionary training. He continued his medical studies in London while training there and was attached to a church in Ongar, Essex to be a minister under LMS.[5] Despite his impressive personality, he was a plain preacher and would have been rejected by the LMS had not the director given him a second chance to pass the course.[4]

Livingstone hoped to go to China as a missionary, but the First Opium War broke out in September 1839 and the LMS suggested the West Indies instead. In 1840, while continuing his medical studies in London, Livingstone met LMS missionary Robert Moffat, on leave from Kuruman, a missionary outpost in South Africa, north of the Orange River. He was excited by Moffat’s vision of expanding missionary work northwards, and he was also influenced by abolitionist T.F. Buxton’s arguments that the African slave trade might be destroyed through the influence of “legitimate trade” and the spread of Christianity. Livingstone, therefore, focused his ambitions on Southern Africa.[5]

Livingstone was deeply influenced by Moffat’s judgement that he was the right person to go to the vast plains to the north of Bechuanaland, where he had glimpsed “the smoke of a thousand villages, where no missionary had ever been.”[4] During this time, he was attacked by a lion while staying in an African village, trying to defend the village’s sheep from the animal. The lion heavily wounded his left arm, and the wounds disabled his arm for the rest of his life.[8] He lived in Hamilton, South Lanarkshire in 1862 for a short time. The house still stands and has a plaque that can be seen outside the house (17 Burnbank Road). He was awarded the Freedom of the Town of Hamilton.[citation needed].

Exploration of southern and central Africa[edit]

The journeys of Livingstone in Africa between 1851 and 1873

The Kolobeng Mission had to be closed because of drought, so Livingstone explored the African interior to the north between 1852 and 1856 and was the first European to see the Mosi-oa-Tunya (“the smoke that thunders”) waterfall, which he renamed Victoria Falls after his monarch Queen Victoria, and of which he wrote later, “Scenes so lovely must have been gazed upon by angels in their flight.” (Jeal, p. 149)

Livingstone was one of the first Westerners to make a transcontinental journey across Africa in 1854–56, Luanda on the Atlantic to Quelimane on the Indian Ocean near the mouth of the Zambezi.[4] Central and southern Africa had not been crossed by Europeans at that latitude, despite repeated European attempts (especially by the Portuguese), owing to their susceptibility to malaria, dysentery, and sleeping sickness which was prevalent in the interior and which also prevented use of draught animals (oxen and horses). Such journeys had also been hindered by the opposition of powerful chiefs and tribes, such as the Lozi, and the Lunda of Mwata Kazembe.

Preaching from a wagon.

The qualities and approaches which gave Livingstone an advantage as an explorer were that he usually travelled light, and he had an ability to reassure chiefs that he was not a threat. Other expeditions had dozens of soldiers armed with rifles and scores of hired porters carrying supplies, and were seen as military incursions or were mistaken for slave-raiding parties. Livingstone, on the other hand, travelled on most of his journeys with a few servants and porters, bartering for supplies along the way, with a couple of guns for protection. He preached a Christian message but did not force it on unwilling ears; he understood the ways of local chiefs and successfully negotiated passage through their territory, and was often hospitably received and aided, even by Mwata Kazembe.[4]

Livingstone was a proponent of trade and Christian missions to be established in central Africa. His motto, inscribed in the base of the statue dedicated to him at Victoria Falls, was “Christianity, Commerce and Civilization”. The reason he that emphasised these three was that they would form an alternative to the slave trade, which was still rampant in Africa at that time, and would give the Africans some dignity in the eyes of the Europeans. It was the abolition of the African slave trade that became his primary motivation.[9] Around this time, he believed that the key to achieving these goals was the navigation of the Zambezi River as a Christian commercial highway into the interior.[10] He returned to Britain to garner support for his ideas, and to publish a book on his travels which brought him fame as one of the leading explorers of the age.

Livingstone believed that he had a spiritual calling for exploration to find routes for commercial trade which would displace slave trade routes, rather than for preaching. He was encouraged by the response in Britain to his discoveries and support for future expeditions, so he resigned from the London Missionary Society in 1857. According to his biographer W. Garden Blaike, the reason was to prevent public concerns that his scientific work might show the LMS to be “departing from the proper objects of a missionary body”. Livingstone had written to directors of the society to express complaints about their policies and the clustering of too many missionaries near the Cape Colony, despite the sparse native population.[4] With the help of the Royal Geographical Society’s president, Livingstone was appointed as Her Majesty’s Consul for the East Coast of Africa.